These bars are skinny berry bars full of fresh blueberries and strawberries and with a base that tastes like Nature Valley’s Peanut Butter Crunchy Bars. They only have 140 calories per bar and have 4 grams of protein!

Happy late fourth of July! I thought these bars looked so festive, because they’re red and blues and the peanuts could maybe constitute the white. How was everyone’s fourth of July weekend? Mine was excellent. The fourth of July is actually my birthday, and I got to spend it in New York City, so I was one happy camper. I got to visit some of the best bakeries in the world, but more on that later (as in later blog post)! First, the recipe! 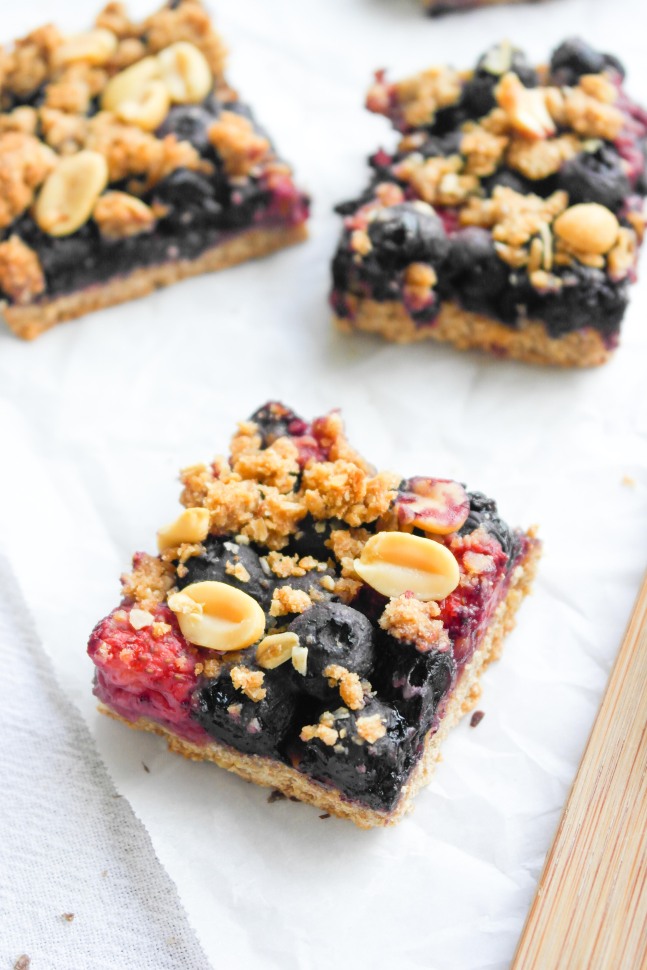 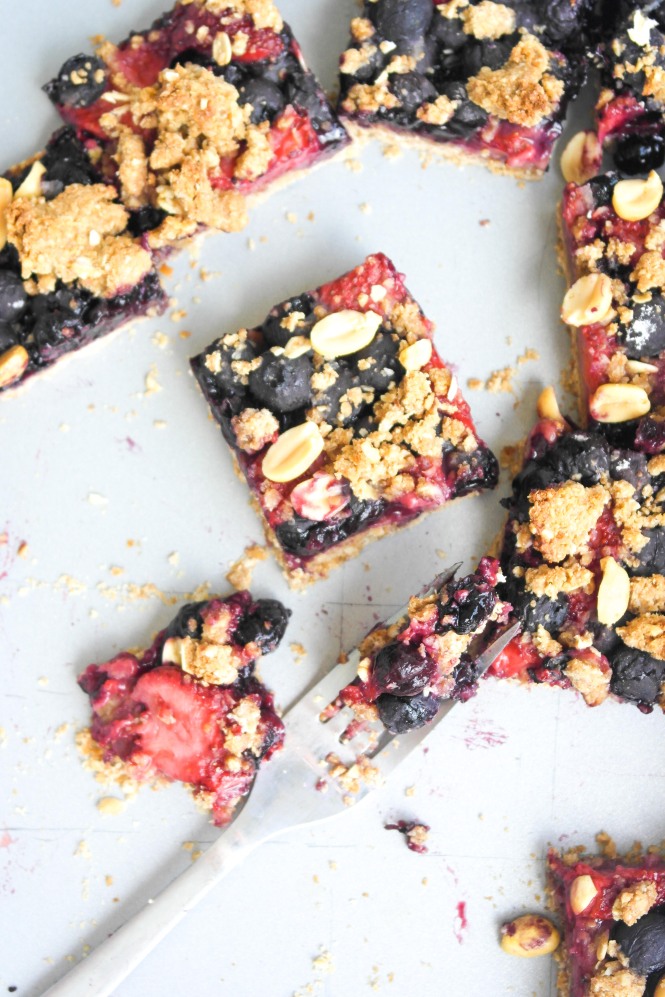 It’s that time of year again when there are buckets on buckets of strawberries all over the place. My mom is the type of person to buy as many strawberries as she can and then eat them for two weeks straight. And then she pawns them off on me and I have a big bowl of strawberries in the fridge. But fresh fruit is a baker’s ooo la la because they present so many options.

So I made these. They’re Skinny Berry Crumble Bars. I used the word “Berry” because I used strawberries and blueberries (also a remnant of my mom’s obsessive compulsive fruit gathering during the summer), but you could easily use raspberries or blackberries in addition or instead of. 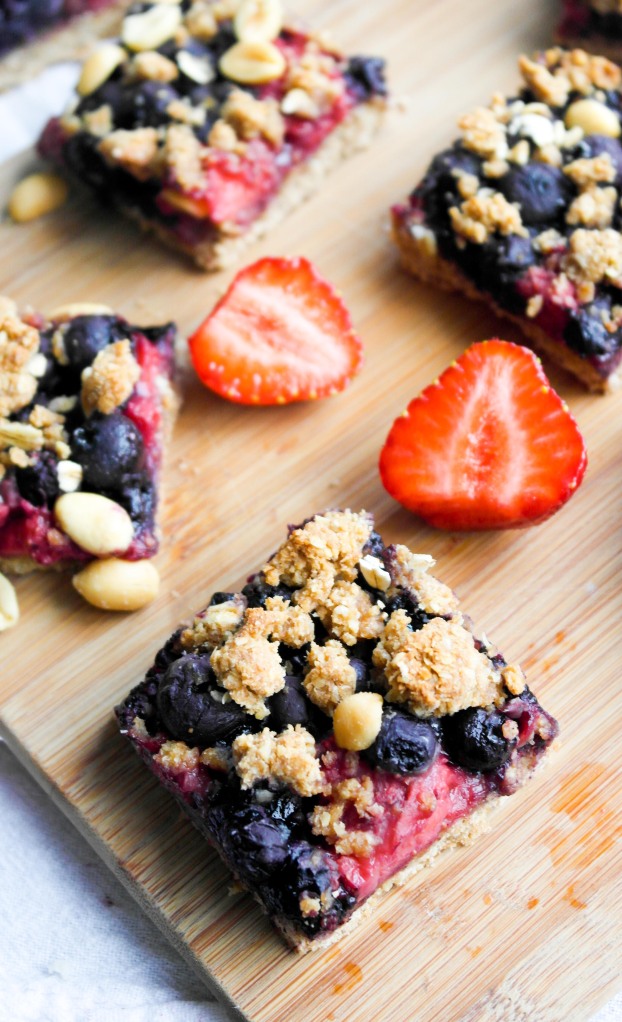 This recipe is a jumble of crumble bar recipes from all over the web. These bars were born of a few pages open on my computer and cupboards open in my kitchen and I just started pulling things down and saying “Oh yes, peanut butter would be good instead of the coconut oil” or “I think I will use some maple syrup AND brown sugar!” These are my favorite baking days.

The base of these bars are primarily oats, whole wheat flour and peanut butter. So healthy, right? Instead of using oil or butter for the base, like many crumble bar recipes do, I chose to use peanut butter instead. Peanut butter is an excellent oil replacement because it’s full of fat, but it also has lots of protein. If you don’t like peanut butter, go for almond butter or even cashew butter instead! You could even try chocolate peanut butter.

I put all of the dry ingredients into a blender and mixed them all up. If you have a food processor, I would recommend that over a blender. I only mixed it enough that everything was incorporated and the oats were slightly pulverized but not completely disappeared. I like being able to see the whole oats in the bars. After that, I took out the mixture from the blender (which smelled a bit smokey because I probably put too much in at the same time) and finished mixing by hand.

A quick note about the peanut butter/oat mixture: you must use an inverted sugar, such as maple syrup, honey or agave. Otherwise, there wouldn’t be enough moisture in the crumble base and everything would crumble (get it?) But seriously. It makes it much easier to pat into the pan. 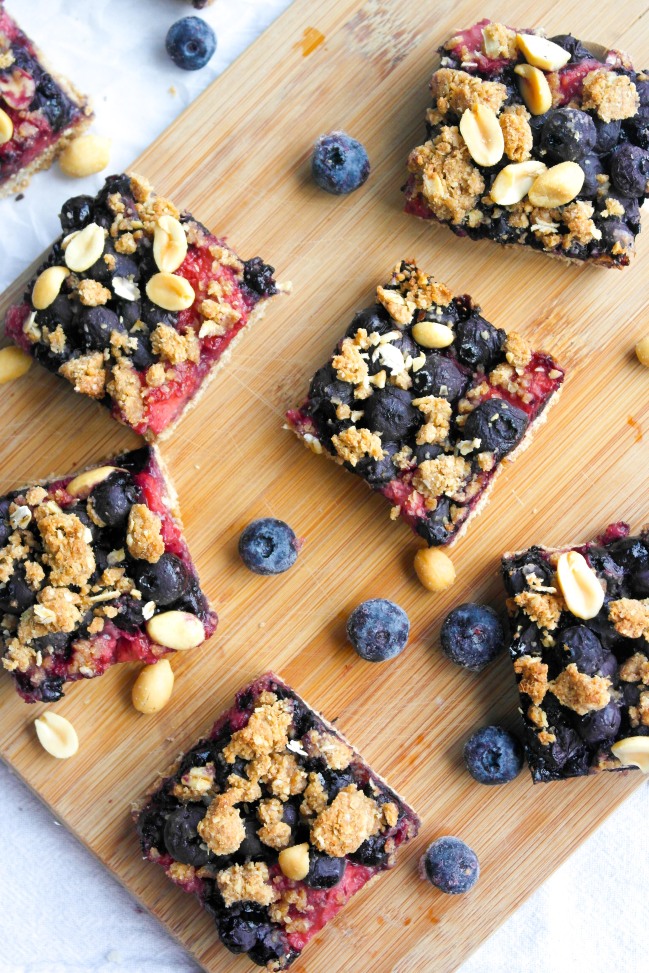 A nice trick I’ve learned for making bars is spraying a 9 x 13 pan with cooking spray and then lining it with parchment paper. The parchment paper sticks to the cooking spray so it settles into the pan very nicely. After I did this, I set aside about a cup of mixture to save for later and then patted the oat and peanut butter mixture into the pan. 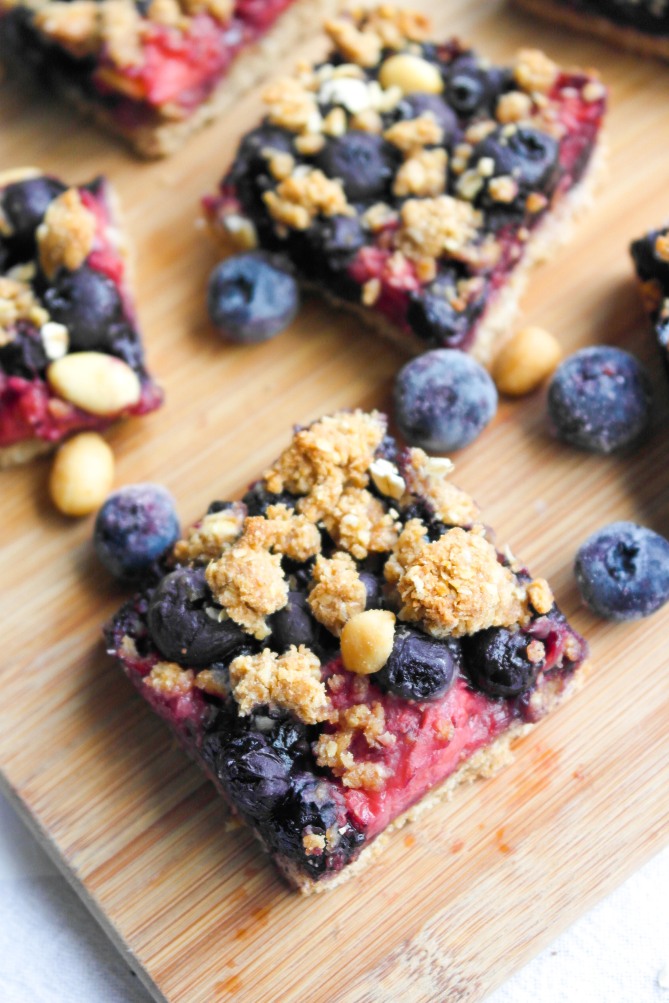 And on to the fruit mixture! If you have fresh fruits, by all means, ’tis the season! Just cut ’em up, toss them with the flour, Truvia/Splenda/Stevia/what have you and the orange juice and then dump them evenly over the crumble base. If you’re using frozen berries, you must let the berries sit out and thaw before you bake them. When berries thaw, they release a lot of water and you don’t want extra water seeping into your delicious, crunchy peanut butter/oat base. Once the berries are thawed, proceed as stated above!

And the final step! Take the remaining crumble base and spread it over the top of the bars. Even though I really liked the big chunks (I mostly picked them off and ate them before I could even take pictures of them), I actually preferred eating the bars with smaller crumbles. So, crumble as big or as small as you’d like! Either way it’s delicious. 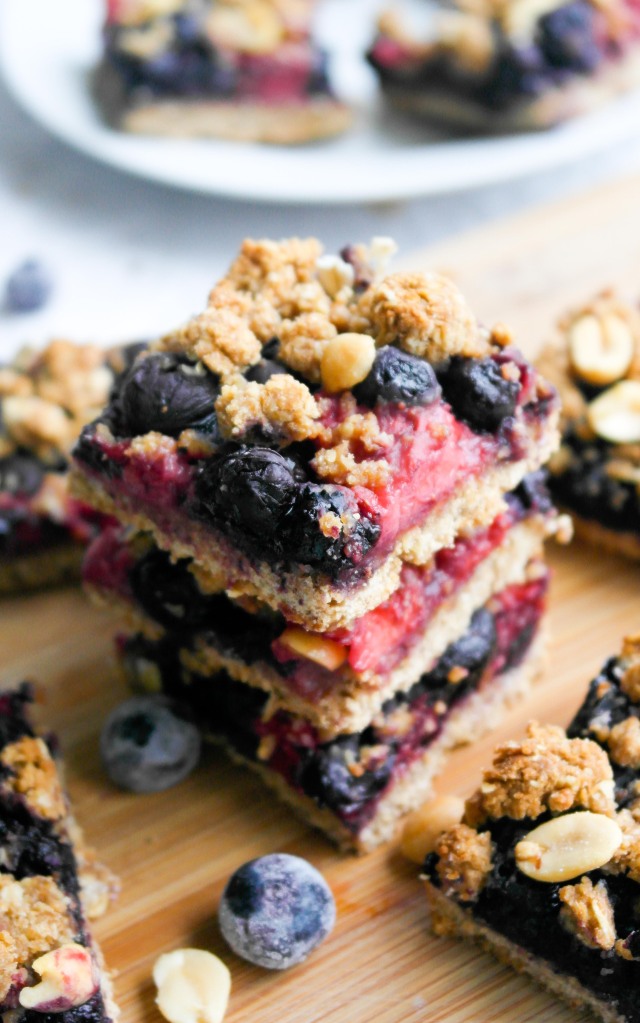 When they’re done baking, let them cool for a bit and then slice. The base of these bars reminded me of the Nature Valley Crunchy Peanut Butter bars. They’re very crisp and crunchy with loads of flavor and packed full of oats. You could eat them as is, or throw some ice cream on them, but then that defeats the “skinny” bit doesn’t it? 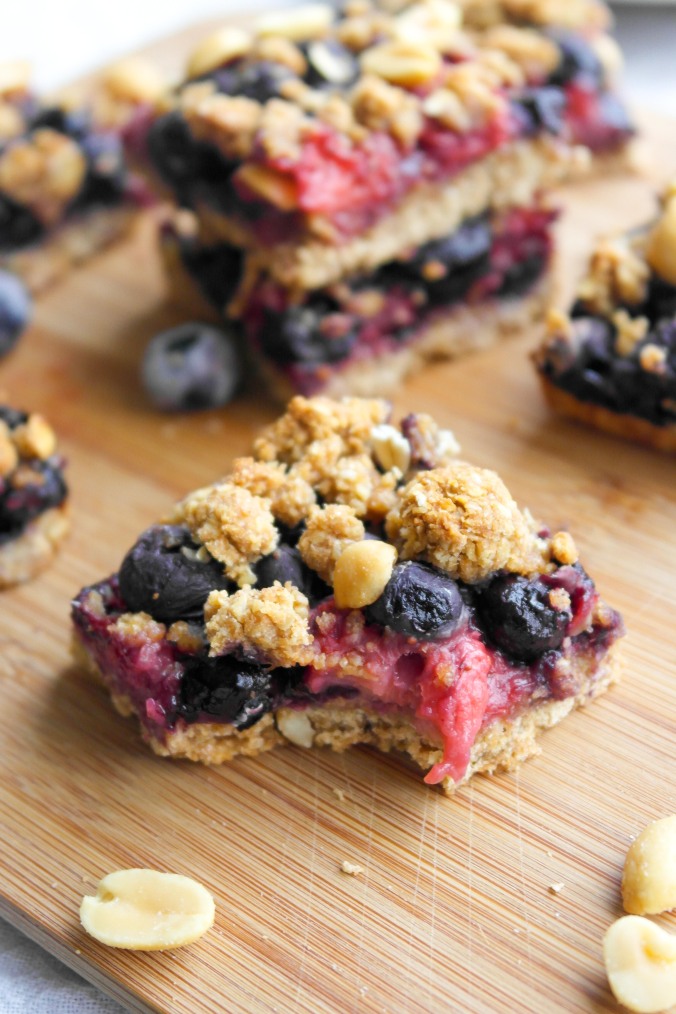 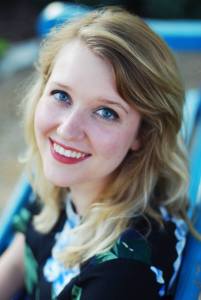