These are the best peanut butter cookies I’ve ever had. They “melt in your mouth” because of the loads of peanut butter, shortening and powdered sugar. You won’t be able to stop at one! 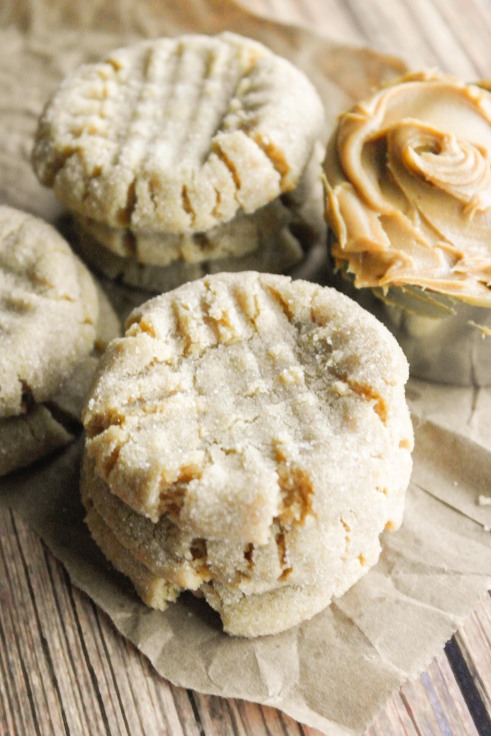 Every baker needs an excellent peanut butter cookie in their repertoire. I mean, nothing is as classic and crowd pleasing as a peanut blossom cookie, right? Right. But sometimes peanut butter cookies are surprisingly flavorless, despite how delicious, wonderful peanut butter is. The worst is when they’re not peanut butter-y enough. So I set out to make an ultra-peanut buttery cookie that blows all of the other recipes out of the water.

I’ve been experimenting with peanut butter cookies for months now. I’ve made the five ingredient peanut butter cookie recipe: it doesn’t have any flour or butter in it. Instead, the peanut butter acts as both the flour and the butter. I like this recipe, but it’s not smooth enough for me. It’s more on the crumbly side. I’ve  tweaked a classic, well-rated recipe I found on Google. I upped the amount of peanut butter (because why not), decreased the amount of butter and off I went. I didn’t like them at all. Once again, they were too crumbly.

Thus perfecting the peanut butter cookie was shelved. (Mainly because I was going through jars of peanut butter and that stuff is not cheap!) And then this week, I owed a friend a favor. I asked him what his favorite flavor combination was, and bless his heart, he says, “Chocolate and peanut butter!” I ran through tons of options in my head, until finally I settled on classic peanut butter cookies with chocolate chips. Once again, I was conquering the seemingly unconquerable peanut butter cookie recipe. (I have perfectionist tendencies.)

I had a few pre-reqs for this cookie: I wanted it to be soft, with a “melt in your mouth” thing going on; however, I still wanted it to have a nice chew. So began the modifying game. Here’s what I did:

When I pulled these out of the oven, I immediately took a fork to one of them and ate it. My goodness. I thought that I had baked heaven. The modifications I made yielded exactly what I wanted. These cookies are soft, yet chewy, but somehow they almost melt in your mouth, thanks to the powdered sugar and shortening.

A few things about these cookies so you can successfully bake them!:

Now, scamper off to your kitchen to make these! I swear you won’t regret it.

The Best Peanut Butter Cookies
Recipe Type: Cookies
Author: Brita
Prep time: 20 mins
Cook time: 13 mins
Total time: 33 mins
Serves: 20
These are the best peanut butter cookies I’ve ever had. They have a “melt in your mouth” quality because of the shortening and powdered sugar. You won’t be able to stop at one!
Ingredients
Instructions
Serving size: 1 oz Calories: 143
3.2.2807